The Path to Trust for Gene Editing in Plants and Animals 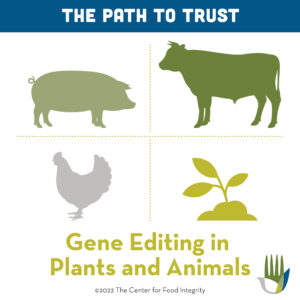 The research, conducted by CFI with funding from the United Soybean Board, identifies the drivers of consumer acceptance and rejection of technology in agriculture and food as a whole. Gene editing in plants, gene editing in animals, plant-based meat and cultured (cell-based) meat were used as study topics.

Based on images evoked by gene editing in plants, the perception is equally divided. One-third of respondents report positive images, one-third neutral and one-third negative.

When it comes to gene editing in animals, 54 percent have a negative image. Only 18 percent have a positive image. Why? Many people have a strong or very strong affinity for animals and often assign human characteristics to them, so gene-edited animals trigger a very different reaction compared to plants.

However, when you look at both plants and animals, roughly a third of consumers have a neutral image. That’s a significant number who haven’t made up their minds and are ripe for engagement.

The research measured specific drivers – those factors that result in acceptance or rejection of each technology. So, what makes consumers accept gene editing in plants?

Third-tier drivers for acceptance are: technology is available to all farmers and growers and information is available so consumers can know when they’re purchasing food produced from gene-edited plants.

There was only one negative driver – a factor causing rejection – and it falls in the third tier: a belief that naturally grown plants are better than those altered by gene editing. 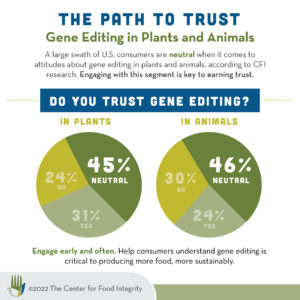 Like with gene editing in plants, safety is the top driver for acceptance. There’s one second-tier driver: gene editing in animals can help ensure a consistent supply of food. Third-tier acceptance drivers include food produced from gene-edited animals is readily available and the technology is used in human medicine. What causes consumers to reject gene editing in animals? The belief that companies are only motivated by profit. It’s that “big is bad” bias and the belief that companies don’t have consumers’ best interests at heart.

Again, we see a slightly higher level of lack of trust for gene editing in animals, but nearly half of consumers are neutral when it comes to both plants and animals.

To earn trust in both gene-edited plants and animals, the food and ag industries should focus on engaging on the top drivers of acceptance to instill confidence. Overcoming any skepticism requires authentic transparency and communicating shared values to ensure consumers you’re acting responsibly and with integrity.

Because the path to trust is a bit of a heavier lift for animal agriculture, some extra effort may be required to overcome resistance. But the research clearly shows that the consumers who haven’t made up their minds on gene editing in plants and animals are likely open to hearing more about the technology from credible sources. Be that source. Engage early and often. Help them understand that gene editing is critical to producing more food, more sustainably.

If you’re interested in learning more about the research, don’t hesitate to reach out. It’s in-depth and provides a great deal of insight into priority messages and key audiences for each technology, and preferred sources of information. Also, consider hosting a tailored session of Engage: Earn Trust in Technology – an interactive, discussion-driven training to equip your team with the skills to effectively engage.