Genetically modified golden rice has been touted as a crop that “could save a million kids a year.” In July 2000, Time magazine featured the potential of golden rice to improve the lives of millions of poor people through its ability to deliver vitamin A to malnourished populations. 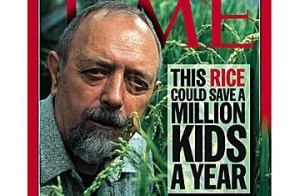 Golden rice includes beta-carotene, the source of vitamin A. Rice is a staple crop in many developing countries, and one bowl of golden rice could supply 60 percent of a child’s daily requirement of vitamin A, according to a study published in the American Journal of Clinical Nutrition.

That paper, published in 2012, was recently retracted following allegations “that the paper contained ethical missteps, such as not getting informed consent from the parents of children eating the rice and faking ethics approval documents.”

Writer Nathanael Johnson discussed the retraction in a recent article at Grist.org. Johnson says the study’s conclusion that golden rice works as well as vitamin A supplements appears to be valid, so what’s the issue?

Johnson speculates that the study’s author sought consent from parents to feed a rice that could deliver vitamin A to their children but didn’t disclose the fact that the rice was genetically modified because the issue of genetic modification is actually a non-issue to many scientists. But it is an issue for many people, regardless of whether it’s scientifically valid. According to Johnson, “failing to consider people’s values, no matter how groundless you think they are, is a recipe for failure.”

Dan Kahan, professor of law and psychology at Yale University, said in a 2010 paper that people tend to endorse positions that reinforce their connection to others whose values they share. As a result, public debate about science is polarizing. And when new science is introduced, this “cultural cognition” causes people to interpret it through a lens of pre-existing bias. Kahan says this explains why groups with opposing views become even more polarized when exposed to scientifically-sound information.

CFI’s 2014 consumer trust research provides a model for making complex and controversial technical information relevant and meaningful, bringing balance to food system conversations, while helping consumers make informed decisions about food and building trust. The goal should not be to win a scientific or social argument, but to find more meaningful and relevant methods to introduce science in a way that encourages thoughtful consideration and informed decision making.

CFI’s research shows that food system experts can make a difference when they choose to engage by first establishing shared values and then providing factural, technical information that is relevant and meaningful. After confidence has been established, people are more willing to consider technical information, or competence, in their decision-making process.

Lusk says the introduction of a biotech crop that captures the public’s imagination without scaring them might pave the way for increased public acceptance of genetically modified organisms. Will golden rice be able to shift public perception?