Another Chapter in the Cage-Free, Crate-Free Debate 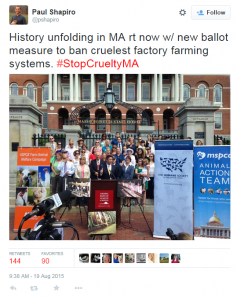 The Humane Society of the United States (HSUS) and other animal welfare groups have identified another state in the effort to get rid of egg-layer battery cages, sow gestation stalls and veal crates. Having already conducted successful initiative petition drives in Florida, Arizona and California, Massachusetts is the target for 2016.

HSUS and others staged a news conference at the statehouse to make the announcement, according to the Boston Globe and other local media outlets. HSUS Public Policy Manager Matt Dominguez tweeted the news to his 148,000 Twitter followers using the #StopCrueltyMA hashtag.

According to the Globe report, the National Pork Producers Council called it an effort to advance a “national vegan agenda” while the United Egg Producers’ Chad Gregory said it would “absolutely 100 percent guaranteed” mean higher egg prices.

GloucesterTimes.com, in an article last weekend in advance of the public announcement, reported the measure could mean higher egg prices because there aren’t enough cage-free products on the market to meet the demands of the state’s 6.7 million people.

“It’s questionable as to whether this would even be allowed under interstate commerce laws,” said the president of the Massachusetts Food Association. A Boston Herald editorial concluded, “Enforcing unnecessary restrictions in a state where confinement is not a problem merely punishes consumers.” 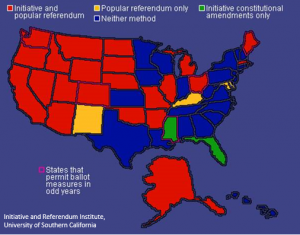 Among the findings—researchers noted that cage-free aviary provided hens with the most freedom of movement, opportunity to perform natural behaviors and was also associated with some hen health benefits. But cage-free birds also were more prone to die prematurely, their eggs were the most expensive to produce and the system had the worst air quality for hen house workers, the greatest dust emissions, the highest carbon footprint, and the greatest potential for egg contamination that could lead to food safety issues.

Similarly, the American Veterinary Medical Association examined the advantages and disadvantages of gestation stalls, group pens and free-range systems for pregnant sows and concluded, “… there is no clear consensus as to which is the superior system across all situations.”

Virtually every sector of society has undergone significant change over the past 40 years and animal agriculture is no exception. Today’s farms look and operate much differently today and when less than one percent of the population is directly involved in farming, there will be confusion, misunderstanding and a communication gap.

Americans have a right to expect farmers and others in the food system to act responsibly and those who do not should be held accountable. Choosing to buy cage-free or crate-free products are great options and valued choices in our food system. But it is overly simplistic to assert that a certain type of housing system is inherently better than another.

Advancements in technology and structural changes in agriculture over the past two generations have radically altered how food animals are raised today. These changes have allowed Americans to enjoy a safe, nutritious and remarkably affordable supply of meat, milk and eggs. They have also raised questions about animal care on today’s farms and animal agriculture needs to address those questions in a transparent and forthright manner.