Has the World Gone (GMO) Crazy? 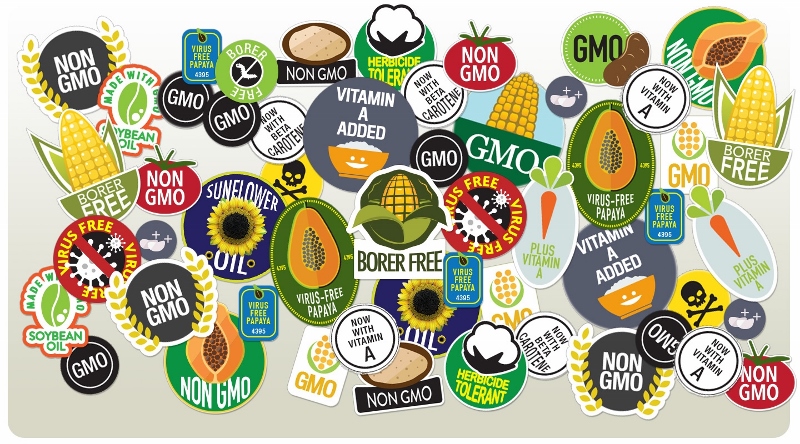 What’s so scary about GMO safety?

As the illustration above shows, it seems the world has gone a bit GMO crazy lately. On a regular basis, food companies and restaurants announce their plans to remove genetically modified ingredients from products and menu items, largely in response to consumer demand. This demand has helped the growth of the non-GMO market segment – in fact, over the past five years, companies have submitted more than 46,000 products to the Non-GMO Project to certify their goods are free of GM ingredients and sales of GMO-free products nearly tripled last year.

In addition to companies vowing to go “GMO free,” some states are doing the same by proposing legisation mandating labeling of foods with genetically modified ingredients. While several states have tried and failed, Vermont is the first state to adopt legislation that would require GM labeling on foods, and other states may soon follow.

So what’s at the root of the non-GMO movement? According to an article on Slate.com, it’s fear. And, says author William Saletan, it’s unwarranted.

Saletan cites a Pew Research Center study that found 57 percent of Americans believed genetically modified foods were unsafe to eat. However, numerous organizations including the World Health Organization, the American Medical Association and the National Academy of Sciences all agree that there’s no good evidence to support the claim that foods containing genetically modified foods are unsafe. Something’s not adding up.

The GMO topic is divisive and complex. Saletan states that the anti-GMO movement is flawed and “…only pretends to inform you.” Further, he states that the principles on which the anti-GMO movement are founded “…are better served by considering the facts of each case than by treating GMOs, categorically, as a proxy for all that’s wrong with the world.”

CFI’s 2014 consumer trust research, “Cracking the Code on Food Issues: Insights from Moms, Millennials and Foodies,” looks at the why – and the “what now?” – when consumers don’t accept what science says is true.

Science is sometimes hard for consumers to swallow, but overcoming the barriers to support informed decision making and foster greater trust is possible. The research shows that building relationships based on shared values is the first step to successfully introducing technical information. Just presenting information and facts doesn’t sway consumers.

Science may tell us that we can create/grow/build something, but society is asking if we should. Can and should are two entirely different questions. Scientists have tried to substitute scientific verification for ethical justification with the result being a growing divide in scientific acceptance.

Building trust is a process. Authentic transparency and continued engagement will encourage objective evaluation of scientific information that supports informed decision making, which requires meeting people on their turf, embracing their skepticism and committing to engaging over the long haul.